What is a CAI? It's a filter on a stick. The idea behind it is to get "colder" air (from outside the engine compartment) into your engine with less restriction (since it does not have to flow through the stock air box).

Which one should I buy? Because it is a filter on a stick, they are all going to have pretty much the same exact effect on your engine. Spending £100 or more on one CAI because it's dyno chart claims it makes 3 more bhp than another brand may not be the best idea, dynos vary, test conditions vary, base modifications vary, in the end you can take nothing as fact when it comes to aftermarket part power increase claims. Because of this if you want to buy a CAI, buy on price, material, colour, accessibility of a retailer, etc.

What are the benefits? In general, you will gain a few extra bhp with a CAI. You will also gain intake noise, which will vary depending on what engine you have.

What are the downsides? The intake noise, and it has been seen many times that CAI's help contribute to MAF failure. As with all MAF failure, it seems to be a crap shoot, but if yours is on the way out or seem prone to failure, a CAI is most likely going to accelerate it.

What about on a turbo? You can suck all the cold air you want, but no matter how cold that air is, its going to be heated as soon as it touches the hot turbo. Therefore the "cold" aspect of an intake is pretty worthless on a turbocharged car, what most people like about them is it makes it easier to hear the turbo spooling (louder) since the muffling aspects of the stock air box are gone.

Can I put a 1.8t CAI on a V5 or vice versa? In general all CAIs will fit on any MKIV. VR6s have bigger MAFs than the four cylinder cars so some manufacturers have different part numbers for the VR6 units, but in the end all you need is a flexible silicone coupling to join the CAI to the bigger MAF (you may even get the one that comes with the 4 cylinder CAI to stretch enough to fit). Also, some units come with a connection point for the crankcase breather hose, while some may not. If your car has a crankcase breather and the CAI does not provide a connection for it, you can solve the problem by buying a mini breather filter for under £10.

What about hydrolock? Hydrolock occurs when the filter element becomes submerged in water causing the engine to actually suck in water. Water doesn't compress, so instead your piston rods will, obviously causing severe engine damage and costing lots of money. Some companies offer "bypasses" that open are supposed to prevent this, but the common claim is that because the VR has a large displacement (relatively in the import scene) and the 1.8t is turbocharged, they both pull too much air for the bypass to be used. There is a simple solution though, if you are running a CAI, don't drive through puddles that you don't know the depth of! You aren't going to hydrolock an engine just because of a large rainstorm, it is standing water that is the biggest foe. If you live in rain susceptible area, or you are very worried about it, a CAI is probably not for you, you'll want to look at the alternatives.

Are there any alternatives? Yes, you can always run a K&N filter in your stock airbox, run ducting to route cold air from the fender well to the stock airbox, or run a short ram intake that is basically an open element filter than stays in the engine compartment. They all have their benefits/drawbacks.

How hard are they to install? Installation usually requires removing your stock airbox and your battery, its not a difficult process and often the first modification people do to their cars. They all install the same way, so you are not going to gain an advantage with one unit over another. 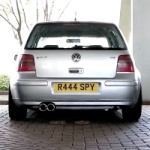 if you look on ebay there is a induction kit for about £8 and all you have to do is get a 2nd hand filter box and rig it to hold the cone. it works great. my mate did it to his saab and as soon as i get my vr5 running i'll do the same... i hope to have pics when it's done which i will happily share.